Many freeways were built by city planners overzealous and obsessed with the car culture. These same cities are now looking into a theory called “induced demand” to prove that the bigger the streets, the more cars on the road. Henceforth, if you make the streets smaller, drivers will find alternate routes and drive less. Freeway and abandoned rail line removals are happening all around the world, and so it the repurposing of the paths back to nature and pedestrians.

Ahead of the 2018 Winter Olympics in Pyeongchang County, South Korea is creating more pedestrian-friendly neighbourhoods with its newest urban skygarden, Seoullo 7010, in the capital city. Many architectural projects have come about since the city appointed its first official architect, Seung H-Sang. This move aimed to kickstart Seoul’s “architectural identity” after years of unchecked development. Dutch firm MVRDV was selected to design Seoullo 7010 as the result of an international competition.

Seoullo 7017 (“Seoul Street”) is a 983-metre-long park featuring 24,000 planted trees, shrubs and flowers. The 16-metre-tall highway was scheduled for demolition but is now connected by a network of bridges and stairs to surrounding hotels and shops. The landscape will change according to the seasons, with blossoms in the spring and autumnal colours in the fall. Blue lighting, which can be adjusted for different events and festivals, illuminates the path at night.

The project follows the success of the High Line, New York City’s only elevated public park. 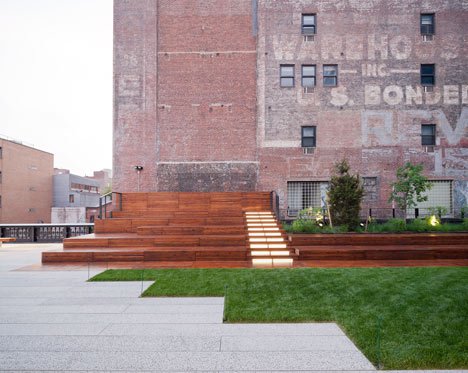 Around 20,000 people walk the paths every weekend (Credit/)

The High Line is a freight rail line that was destined for demolition and transformed into New York City’s only above-city public park. The landscaping is based on a wild, self-seeded look that bloomed on the tracks following the railways’ disuse. High Line Art commissions art projects on and around the elevated park, including exhibitions, performances and video programs.

This lineal Park is so well designed and constructed by taking this old rail line and connecting people in a renewed way. The planning was deliberate and the execution inspirational. What a beautiful way to connect the villages of New York City.

Take a free public tour or join a private, art or garden tour of the 1.5-mile park, which winds through 22 blocks of Manhattan. There are bike racks and Citi Bike (bike sharing system) locations along the path, a water feature with lounge chairs, picnic spots, and great viewing decks for admiring the sprawling city. During a stint in New York City, graffiti artist Banksy used space at the High Line to showcase his talents with a pop-up gallery. 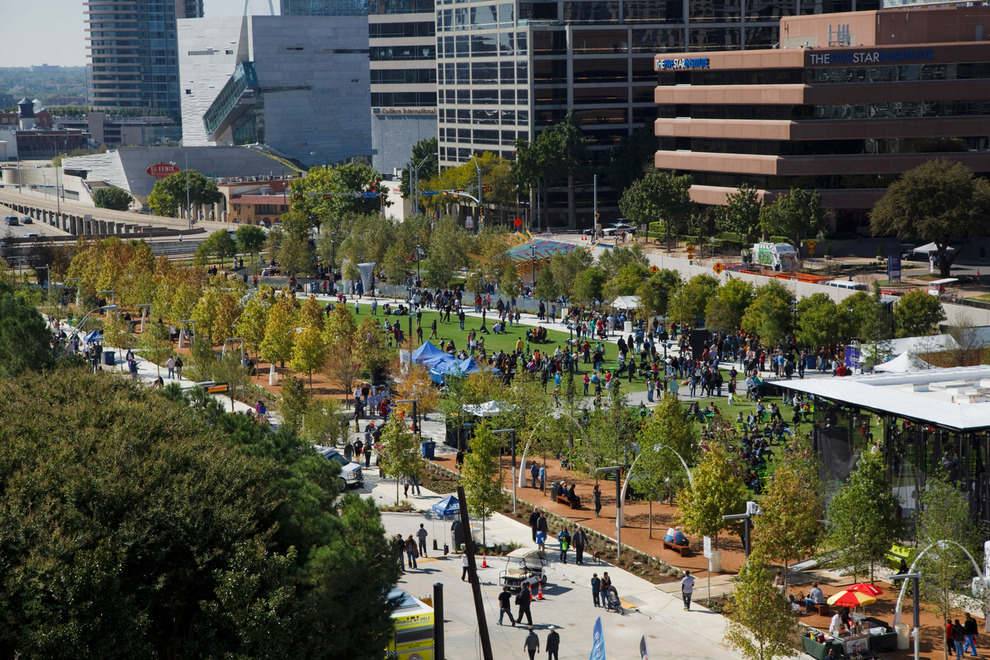 The park is estimated to cost US $250 million (Credit/cadincadout)

Urban planners believe Atlanta’s population could double in the next 15 years. And the Southern city is already notoriously traffic-jammed as it is. An ambitious proposal to build a nine-acre park over a highway in Atlanta’s chic Buckhead neighbourhood is moving forward. Construction work on Buckhead Park Over GA400 should begin in January 2018, groundbreaking by 2020, and a fully operational park will open to the public by 2023.

The park will be designed by two New York-based firms, ROGERS PARTNERS Architects + Urban Designers and Nelson Byrd Woltz Landscape Architects. Buckhead Park Over GA400 will feature an open scheme with various public spaces, such as a Commons, a Plaza, and the Gardens. It will be connected to various pedestrian paths. 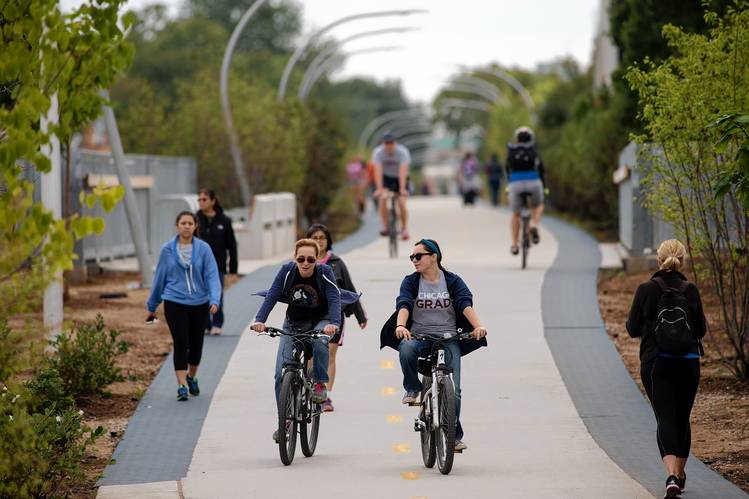 For nearly a century, Chicago’s elevated railways served a small manufacturing district across the city’s Northwest side. In the 1990s, Chicagoans wanted to reclaim the long-defunct Bloomingdale elevated rail line and fill one of the least green neighbourhoods with the city’s greatest park spaces.

The Bloomingdale Trail, or 606, was unveiled in June 2015 after 10 years in the making. The project is named for Chicago’s 606 zip code prefix—a reminder of the community members’ connection to each other and to the city’s transportation history. The rails-to-trails project brings together art, history, design, trails, event spaces and green, open space to the people of Chicago. 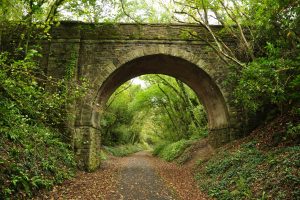 Tarka Trail, in north Devon, is one of England’s longest cycling and walking paths (Credit/Wikimedia Commons)

Although not always elevated, disused railway lines around the UK are being converted into bicycle and walking routes. Many lines were affected by the brutal cutbacks of the Beeching closures in the mid-1960s. In 1963, The Restructuring of British Railways report outlined plans to close more than 8,000 kms of track and over 2,000 stations. Now, many of these repurposed paths run through beautiful countryside and offer safe cycling for families.

Tour the kilometre-long 1970s highway in Seoul that has been turned into an urban garden.