Tesla has just unveiled its new all-electric semi truck, crushing both industry expectations and competitors with impressive specs, features and performance details. The sleek long-haul was announced in true showman’s style, with crowds cheering as the semi drove through the LA Jet Center airplane hangar, with Elon Musk at the wheel. The Tesla Semi is a Class 8 large hauler freight truck capable of pulling a 152-metre trailer.

Musk claimed that the new product would “blow your mind clear out of your skull and into an alternate dimension.”

A decade ago, Elon Musk introduced his Master Plan, which was very simply laid out:

Ten years on, the Tesla is all grown up but this is one car that just get better with age. Musk laid out his best plans and accomplished them.

All-electric trucks are rare, but this machine is like something out of transportation sci-fi, should “fantasy vehicles” actually be a genre. Several other companies, such as Cummins and Daimler, tried to introduce electric trucks, but they were more concepts than finished products.

The Tesla Semi can go 0–60 in five seconds. Even when pulling its maximum gross weight of 80,000 lbs, this bullet-train-like 18-wheeler can get up to 20 mph in 20 seconds. “Worst case scenario”, says Musk, “You’ll have a range of 500 miles”. That’s maximum weight at highway speeds.

And in a best-case scenario? A convoy of these babies would cost HALF of what it would cost to run a diesel convoy, which even beats rails, he boasts. With no engine to speak of, there’s more room in the cab, and like all Tesla cars, the semi has built-in connectivity to the system. Oh, and did we mention that the Tesla Semi comes with nuclear explosion-proof glass? This vehicle may be from the future, but Musk thinks you’ll get there faster in a Tesla.

Wal-Mart has ordered 15 of these new semis, production of which are to begin in 2019, and Canadian grocery giant Loblaws has confirmed an order of 25. Tesla’s new all-electric semis could very well revolutionise the trucking industry for good.

Almost to the day, Musk introduced Master Plan Part Two, which coincided with the Tesla Semi launch. How does part two differ from part one?

Musk gives it to us again (in cherry-red) 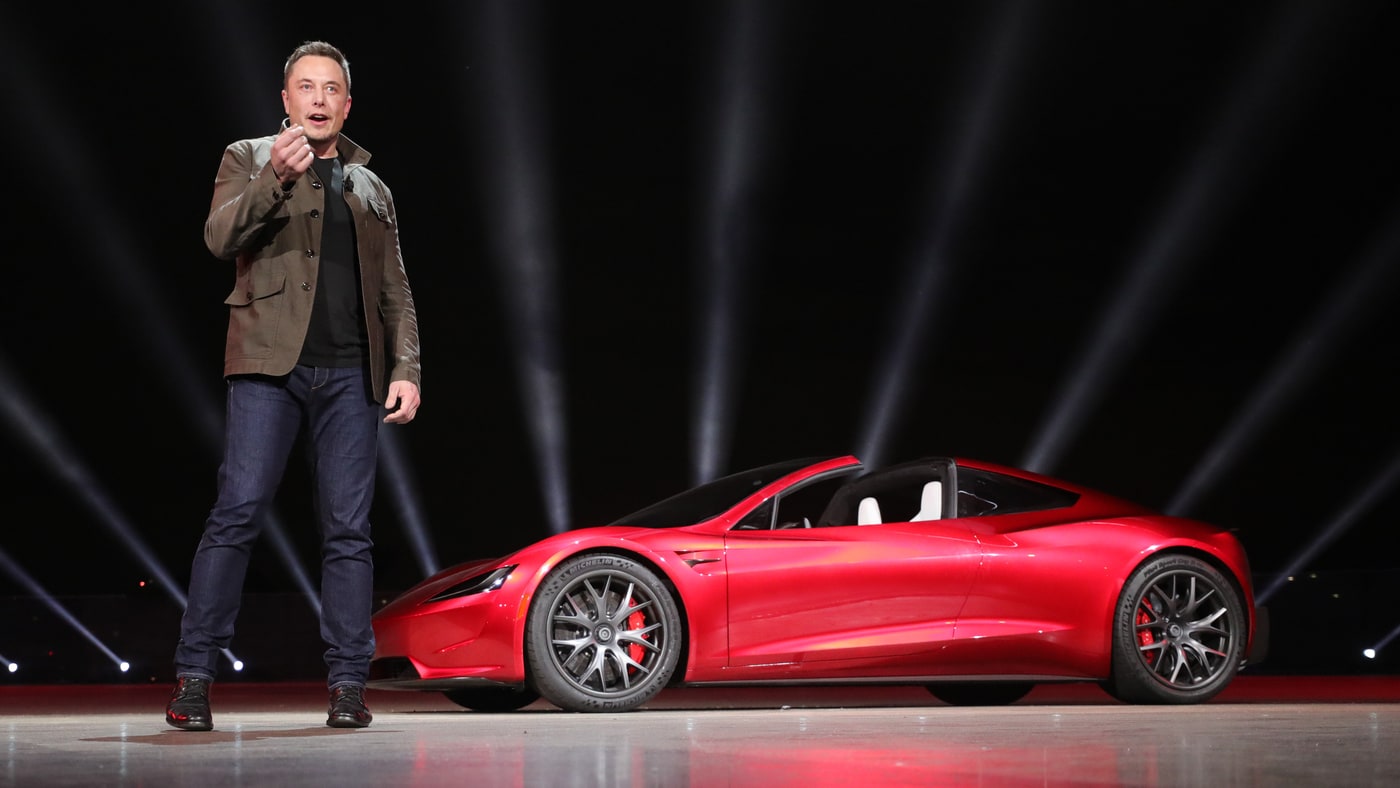 Just as the crowd thought the showman’s performance was over at the launch, the grey Tesla Semi backed up and unloaded the next surprise. Bathed in smoke and blaring music, out rolled the Tesla second-generation Roadster in saucy cherry red. The four-seater convertible has a range of 620 miles—that’s almost 1,000 kilometres on a single charge—and it goes from 0–60 in 1.8 seconds and can travel a quarter mile in just 8.9 seconds.

This is the first time that any production car has broken nine seconds in a quarter mile. The new Tesla roadster will be the fastest production car ever made—period.

Tesla has proven that big can be bad-assed, and sporty can be damn sexy. And that electric can be faster than all of you put together.

There’s only one thing better than getting it once from Elon Musk in a day, and that’s getting it twice.