Faced with a devastating exponential rise in illegal rhino poaching in South Africa, Rhinos Without Borders was formed in order to start moving these endangered animals away from the poaching hotspots to a safer environment. The Rhinos Without Borders project has just ensured a bright future for an additional twelve white rhino, which were recently airlifted to their safe new home in Botswana. The project, which aims to translocate a total of a hundred rhino, is spearheaded by conservation-minded travel companies andBeyond and Great Plains Conservation.

Watching the rhino set free in their new home was a very emotional moment.

The latest achievement was another milestone towards the project’s goal of bringing a hundred rhinos across the subcontinent, from high-risk areas in South Africa to highly protected safe havens in Botswana. It was a top secret mission during which the rhinos were deposited on a dirt airstrip in an undisclosed location by a Botswana Defence Force C130 airplane and under heavy military guard.

Rhino are currently being poached at the rate of one every eight hours and it makes good conservation sense to move them away from clustered locations that are easier for poachers to target. With Botswana in need of genetic diversity in its national rhino population, the Rhinos Without Borders project has been getting the nod from all sectors for being innovative and proactive in solving a number of conservation problems. 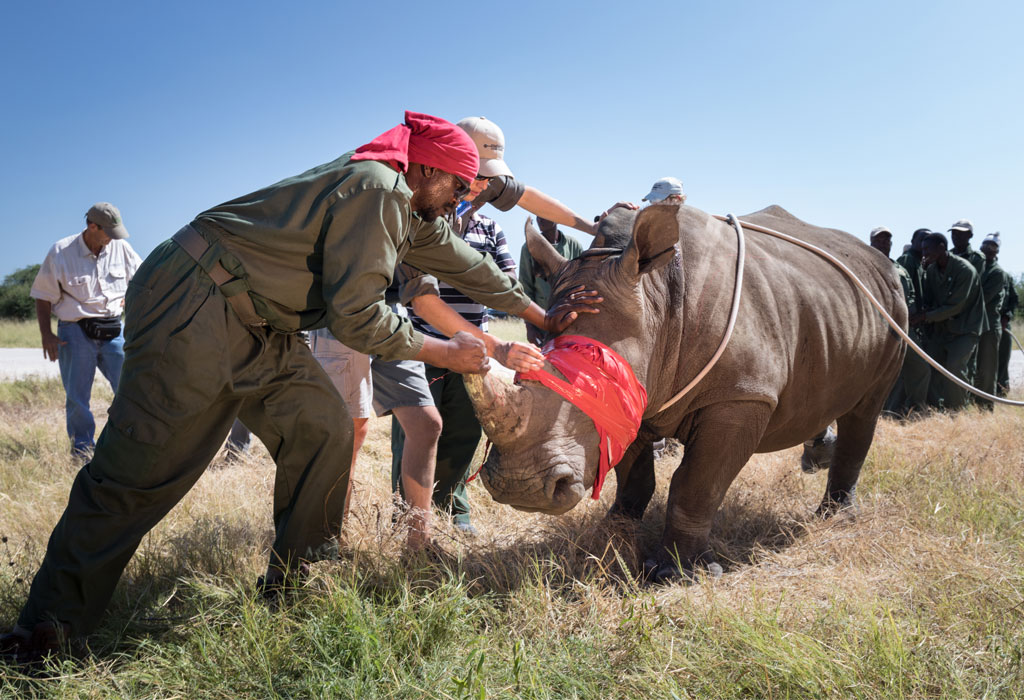 A sedated rhino is brought to safety (Credit/Rhinos without borders)

The twelve animals that recently arrived in Botswana place the project exactly on target and well established to meet its goal of one hundred rhino. His Excellency Lieutenant-General SKI Khama, the President of Botswana, as well as TK Khama, the Honourable Minister of Tourism, both participated in the release. The minister expressed his conviction that the unique partnership, which combines government involvement with private companies such as andBeyond and Great Plains as well as private donors, proves that tourism can make a significant difference in the conservation of Africa.

It’s not often that one gets the chance to rewrite the future history of a species. A few years ago the ink on the future of rhinos here was just about dry and it told a story of extinction. We’ve changed that and we’ve done it by collaborating with our friends and with like-minded people around the world.

To find out more or to contribute towards future endangered rhino relocations, visit www.rhinoswithoutborders.com.